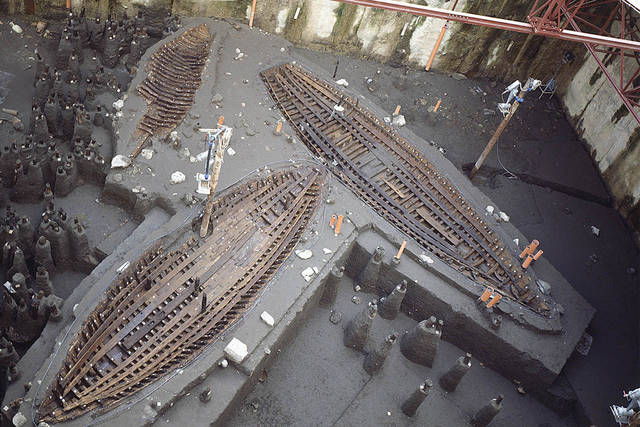 When work is complete, the Town Hall project undertaken by Portuguese architects Ŕlvaro Siza and Eduardo Souto de Moura will bring metro lines 1 and 6 together in one large transport hub. This new underground space will serve as a pedestrian link between the port and the historical area of the city, while urban planning at surface level will enhance the perspective axis from the Maritime Station at the Town Hall to the San Martino hill.

The Fountain of Neptune, a large marble group created by the work of Domenico Fontana, Michelangelo Naccherino and Pietro Bernini up till the end of the 1500s and subsequently by Cosimo Fanzago, has already been relocated to the square in front of the Town Hall.

The large Municipio transit area will incorporate and showcase the exceptional archaeological finds unearthed during the excavation work for the station in one of the largest archaeological investigations of the last decade. The antiquity unveiled by the excavations begins with the ancient port of Neapolis, which stood in a small inlet now buried under part of the present-day square. The excavations ass brought to light the sea bottom, sunken ships, a large wharf of the Augustan age, and traces of the occupation of the coast in the Hellenistic and Imperial ages. We continue with extraordinary remains of buildings of the Angevine period erected at the same time as Castelnuovo in the late thirteenth century, and the outer fortifications of the castle, built under king Alphonso V of Aragona and then the Spanish viceroys, with the towers of the Molo and the Incoronata. The latter is already visible today on the landing of the Line 1 station.

The constant dialogue between modern architecture and existing historical structures salvaged inside the station is the guiding theme of the project by the two Portuguese architects, featuring clean lines and skilful attention to finishings in lava stone and white plaster, in which the lessons of the great masters of the Modern movement are reflected in its geometric lines.

The station contains a single, large contemporary art installation: Passages by Michal Rovner (Tel Aviv, 1957), a "video-fresco" - as defined by Achille Bonito Oliva, artistic coordinator of the Art Stations - in which images from five high-precision projectors blend with images drawn in pastel and painted with water colours by the artist directly onto the long, white wall of the atrium (37.70m x 4.00m).